A Word for Today

“And on that day when evening had come, let us go over to the other side.  And leaving the multitude, they took Him along with them just as He was in the boat, and other boats were with Him. And there arose a fierce gale of wind and the waves were breaking over the boat so much that the boat was already filling up. And He Himself was in the stern asleep on the cushion. They awoke Him and said, ‘Teacher, do you not care that we are perishing? And being aroused He rebuked the wind and the sea and said, ‘Hush, be still.’ And the wind died down and it became perfectly calm. And He said to them, ‘ Why are you so timid?  How is it you have no faith? And they became very much afraid and said to one another, Who then, is this that even the wind and the sea obey Him?”

The last thing I can imagine is that Jesus would be asleep in the middle of a raging storm. Doesn’t the whole Bible affirm that no matter what we face our God is there for us? Isn’t that our response to every detractor who throws in our faces that God must not be good if He allows unmitigated tragedy? And here at the brink of tragedy, Jesus is. . .asleep!?

The first reason I think He is asleep is because the disciples did not need Him. Self-sufficiency is a sin. We are neither created nor redeemed in order to pick ourselves up by the bootstraps. It’s hard for fishermen to ask a rabbi to help with areas they have succeeded in before. It shocks me how often I wait until the waves start breaking my own boat apart before I cry out to Jesus.

Humbleness is only ever received. To be saved by Jesus one must be humble. I have found Jesus doesn’t push His way into my worries, anxieties or my struggles. I must invite Him in and realize my absolute and undeniable need of Him.

Another reason He “sleeps” jumps out at me in a phrase we often miss, “other boats were with them.” I remember the day it dawned on me that Jesus was not in those other boats and for all we know they made it through the storm without needing Jesus. But His disciples were forced, out of fear, to call out to their Master, even though they seem to be rebuking Him more than asking Him to help. I think storms have the uncanny ability to point out one’s pride. Calling out to Jesus in the midst of people who are apparently making it through difficulty without having to cry out to Him can be quite embarrassing. It’s hard to call out His powerful name especially when no one else is.

The challenge to us in this present how clearly, we make it known that the only answer to the problem of evil, to untold sorrow, seemingly relentless pain, the crushing weight of hopelessness, is Jesus. There is something inexorably divisive when you bring Jesus into any situation. He is never one answer among many. He is either Lord of all or just another anemic sage. He claims that He alone is the One whom winds and waves obey. But He is much more interested in the dependence of a windswept and overwhelmed heart like mine. He is uncovering everything about my heart when I demand that He stay in the back of the boat as long as things are going swimmingly, but He better show up pronto when I am in a dither!

I am always intrigued at how long it has taken me to realize what Jesus is trying to teach to us. He is, by sleeping, challenging all of our supposed strengths and my inveterate pride. And every storm that I have attempted to ride out without Him has proven my own humility. I have come to a place that the sentence prayer, “Jesus, help me,” is almost constant. I breathe it. I say it out loud. I think it. And, I have noticed that often, not because of mere repetition, but because of the reality it reveals, a peace descends upon my spirit and another perspective begins to transform my narrow one.

It is nearly laughable when Jesus asks His own small group, “Why are you afraid?” But He is pointing out the real problem: their tendencies of self-sufficiency and pride. According to Jesus they had no faith. They liked His teachings and His miracles but they had not yet come to fully lean upon Him in every circumstance He will never yield on that point. I wonder if The Salvation Army could be the clearest voice in the face of this unseen future. Even if “other boats” are not crying out to Him–we will. Without self-sufficient reserve or prideful silence, we will cry out to Him.

Whatever you face, hear or experience today that brings the faintest amount of fear or anxiety–think, say or write the name of Jesus, call out to Him personally in total trust.

ALL ARTICLES
Previous Article
A Message from the Editor: This Is Not Fake News
Next Article
Fight for Good Podcast: Episode 25: Commissioner Heidi Bailey 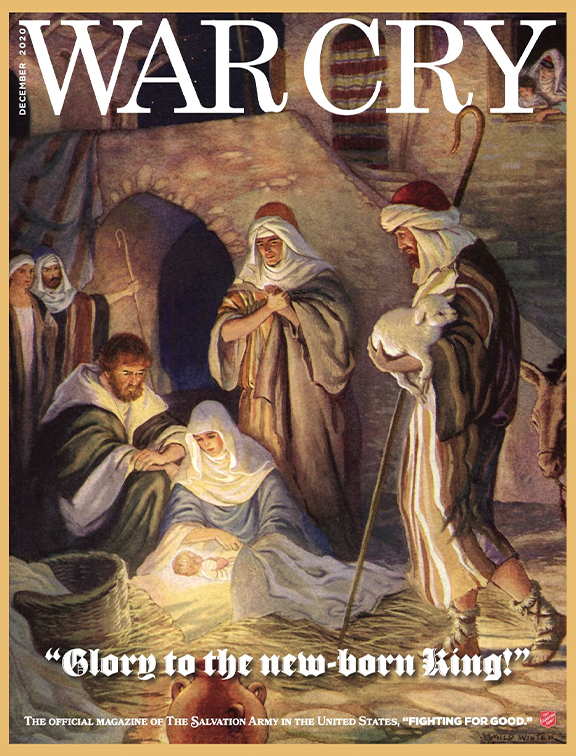